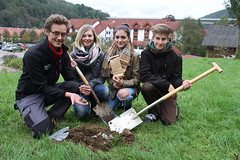 In the Sparkling Science project "TeaTime4Schools", students, together with scientists from AGES and Open Science, investigated the biological activity in Austrian soils. With the help of a simple and easy-to-use Tea Bag Index method, where standardized tea bags are buried and weighed, the students determined the decomposition rate of organic material in the soil. New insights were gained about the interaction between decomposition and microbial activity of the soil.

Over the two-year term, the Higher Federal Institute for Wine and Fruit Production in Klosterneuburg buried teabags in different soils at four different times and determined the rate of decomposition. In addition, the microbial communities in the soil under investigation were analyzed by means of next-generation sequencing analysis. In addition, information on the methodology was given, the technical background was explained, and the data analysis and interpretation of the results were carried out together with the students and scientists involved in the project. In addition to the partnerships, 150 Austrian school classes were involved in the project, and determined the Tea Bag Index in soils close to their schools. The goal of the project was to create an Austrian map of decomposition. The map was integrated into the global map of the Tea Bag Index Initiative, in which AGES is involved. All results were presented jointly by the scientists and students at the large final workshop.

Through the project, Austria became an innovative actor in the mapping of decomposition rates with the help of Citizen Scientists. All project partners and stakeholders gave new insights into the role of microorganisms in decomposition. Furthermore, students' awareness of the importance of the soil, its functions and its influence on the global carbon cycle and climate change increased.