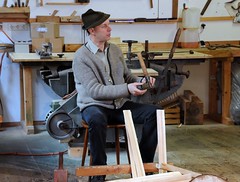 Old knowledge - ready for the future

Wood is even today one of the most important raw materials. The processing of wood, however, has changed considerably - from farm or manual processing to ultra-modern industrial products. The knowledge about wood selection, storage, processing etc. has traditionally been passed on from generation to generation. Only in exceptional cases written records are available. During the 14th century special crafts were developed. But here, too, the oral transition of knowledge prevailed. The existing publications often do not provide the necessary details to understand the working steps or why a specific type of wood has been used for a certain purpose.

The goal of the project was a complete documentation of selected woodworking techniques. This required new concepts of film production, which are developed jointly according to a strongly participatory approach of pupils and scientists. For example, head cameras, 360 ° video and virtual reality content were used to follow the work steps optimally. Each concept was discussed in advance with the craftsmen and scientists (wood research, folklore, media technology). Before the film shootings it had to be determined, what the "key scenes" were and how to document them best. The films were meant to enable people with handicraft skills to imitate these techniques. The pupils were be introduced to the selected crafts during the preparation and were actively filming and cutting.

On the one hand, detailed film documentaries were be developed and, on the other hand, a modern dissemination was carried out in order to inspire people for woodworking crafts. These films must therefore be available online, on a mobile basis and adaptable for young people. Only in this way it will be possible to motivate young people for crafts in general and to enable easy access. The pupils were very important for the development process, as they had a significant influence on this design step because of their user knowledge.