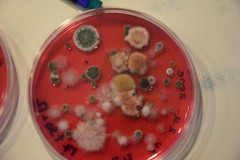 PiNet - Communication networks and the cellular memory of microbioal communities

Each living cell must permanently be able to receive signals generated by the environment and integrate them into its actual metabolic and developmental genetic program. Filamentous fungi are the archetypical type of multicellular eukaryotes in which cells are connected by a common cytosol and metabolome but nuclei remain in each of the cells. These interconnected cellular networks are called mycelium and we tested in this project to which extent, how quickly and how far environmental signals are forwarded from a single point in the mycelium to neighbouring cells. In other words: how strong is the fungal “internet”? In addition, fungi have “invented” epigenetic type of gene regulation which describes the establishment of a transcriptional pattern by chemical marks on DNA or chromosomes that is inherited – and thus “memorized” - from one cell generation to the next even if the original signal has vanished already. We tested in this project of the fungal “internet” is not only able to forward genetic information within the network but also to store it as epigenetic memory.

We used new genetic and microscopic technology to perform experiments which provided insight to these questions. And with the help of students, we analysed a great number of different interaction between fungi and environmental conditions including other fungi, bacteria or algae.