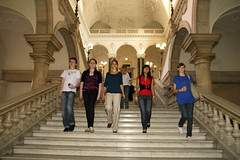 Vienna, 1020 – Students investigate the History and Presence of their School

School has never been measured and evaluated from all sides as it is today. Starting with PISA up to national quality management programs, performance and the engagement of students are continuously examined. But if the opinion about and the notion of school itself is under discussion, the voice of the majority of the people involved – the students – is not taken into account. Even if they are addressed directly, they appear only as informants, not as interrogators.

This project addressed students as researchers of their own surrounding reality. In this process it was of major concern that students developed an understanding about problems and questions in social sciences and that they perceived their own surroundings as an object of research. Therefore, the methods of „student research“ and „peer evaluation“ were used – methods of social sciences that are almost unknown in Austria – and the methods of historic and comparative school research. Students (as well as the involved teachers) became acquainted with appropriate methods and learned how to use them.