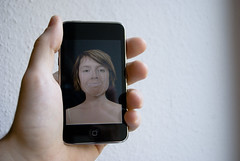 eXcellent Interface for Nonphatic Use

The project XINU (eXcellent Interface for Nonhaptic Use) focuses on developing a control concept based on a visual user interface, which is capable of translating visual commands based on 3D face tracking, mimics, and face recognition. This control concept shall be applied as a prototype for building automation by using state-of-the-art face tracking software library and common off-the-shelf actuators in different settings of a school building.

The HTL W3U in Ungargasse, Vienna, is the only integrative polytechnic high school (HTL) in Austria which does not only permit implementing a system for visual control, but also enables adaptations to support handicapped scholars fulfilling their special needs. The system shall enable such scholars to attend school and continue barrier-free living. In this project scholars support each other by using modern science. They do not only benefit of the educational content, but also help improving integration of their colleagues by tackling the issue of special needs due to bodily impairment.

The project innovates extending control principles for building automation components based on new methods in communication using purely visual control information. The research of XINU does not focus on developing new algorithms for face tracking and recognition, but on the assessment and selection of existing methods, which appear feasible for visual control. One of the project’s tasks is the design of a meta-language and the according set of commands, which shall translate head movements in according control commands. This principle shall enable other exciting application fields, e. g. human machine interfaces in robotics, where the system would allow users to control robots with integrated cameras just by head movements.

This research project is strongly application oriented to emphasize optimal cooperation between scholars and researchers. The outcome within the project contains results that will be integrated in the scholars’ learning environment being part of their daily routine, aiming for rapid noticeable progress within the limited spare time of scholars (volunteering beside their regular duties in school) and teachers (also working additionally to their regular schedule). It shall demonstrate how technologies of this project can be applied accurately and for a meaningful purpose. Bodily challenged scholars represent a group of experts in usability of aiding technologies due to their lifelong experience. The basic research of this project is warranted by the know-how of the scientists and is expected to be deepened by follow-up projects.