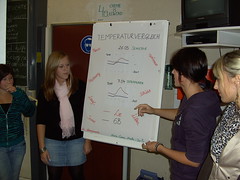 Searching for Footprints of Climate in Classrooms

We spend 90 % of our time indoors. The expected raise of temperature due to climate change will make heat more and more to a problem especially in the summer term. Heat in classrooms is a current problem in all three schools participating in the project.

In the winter term 2008/09 the extensive measurements that was made in the summer term 2009 were prepaired. One Kick-Off-Meeting for the teachers already took place as well as Kick-Off-Workshops together with the students in each school to give an introduction to the thematic area heat and concentration ability and to plan the following research activities.

The most extensive phase of the project ws the summer term 2009, when all the measurements took place. In order to answer the research question, indoor climate was measured in several classrooms and the faculty rooms during the summer term. Approximately once a week, students made tests of attention during the lessons, which lasted only four minutes each. These tests delivered values as a measure for the actual concentration ability. Additionally, students worked out what factors could influence the ability of concentration aside from heat together with the scientists. Those factors were documented as well. The plan was to make the real time data measurements, carried out in the classrooms, available in the word wide web.

In addition to the scientific work, students get to know each other and visited the other schools and went on scientific excursions.

About 140 students from three schools collected data together with scientists and teachers during the summer term. These data were analysed in the winter term 2009/10. The findings were used to search for simple measures that were easily realised and had the effect of improvement of the indoor climate and the ability of concentration without needing additional energy.

In this project the scientists wanted to pick up a problem that directly affects students and wanted to show that science gives answers to questions drawn from life and offers solutions for them. It was important for them to communicate how research works and they wanted to get new impetus from the young people to their own work.