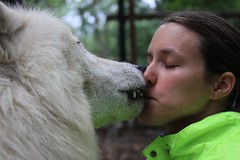 Human attitudes towards wolves and dogs

Attitudes of different segments of people living in Eastern Austria towards wolves and dogs; a questionnaire and behavioural survey

Wolves, especially their human-friendly form of dogs, are the earliest companions of men. But the closer the relationship between humans domesticated relatives of wolves, the dogs became, the more conflict-prone turned the relationship with wolves. Not only by reasoning, rather because affective and cognitive attitudes, which lead human actions. Thus, how well humans and wolves get along as well as the status of dogs in the society depends mainly on these attitudes. In this project we investigated the cognitive attitudes towards wolves and dogs by questioning certain segments of people living in Eastern Austria. Furthermore, we confronted some of these participants with the animals (wolves and dogs) of the Wolf Science Centre and anlaysed their behaviour while in close contact.

These were our main questions:
Attitudes of different fractions on the population in eastern Austria towards wolves and dogs
Is a dog-fancier in general also a wolf-fancier?
How do humans behave in close contact with wolves and dogs?
Do the behaviour and the answers in the questionnaire match?


The design of the study facilitated but also necessitated the full integration of two groups of high school students, one from the BORG Mistelbach and one from the BG/BRG Pichelmayergasse in Vienna (students will be involved in questioning, coding of the behaviour, analysis, publication of the results). Within the preparatory phase, the students showed high motivation. Together with the expertise and commitment of the scientists this leaded to a successful project. The results of this innovative concept evokes interest within the fields of wildlife conservation and Human-animal-relationships. Furthermore they form a basis for a well-directed attempt to increasing awareness on wolves.