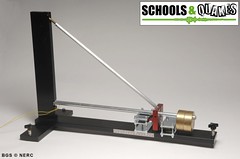 Seismometers installed at schools as well as related tutorials and educational projects represent valuable contributions to seismological research in many countries. SCHOOLS & QUAKES pursues goals along the same line, with emphasis on widespread integration. The Mürz Valley and the southern Vienna Basin were selected as project areas because of their relatively high earthquake hazard and risk. The precise location of earthquake hypocenters, characterization of the focal mechanisms and correlation of hypocenters with active geological structures are the main scientific goals in this project. Furthermore, the long term build-up of tectonic stress and how it relates to actual and expected seismic activity was also an issue we addressed.

The scientific efforts of SCHOOLS & QUAKES builds on the work of the seismological service of the ZAMG, and benefits from the findings on the lithospheric structure of the Eastern Alps gained during former projects sponsored by the ÖAW. The existing seismic network in the area has been expanded and made denser by new SCHOOLS & QUAKES seismic stations. Experience gained so far from the network densification demonstrates not only improved location accuracy but also a significantly better description of the focal mechanisms. New algorithms for the determination of focal mechanisms were tested and developed further. The reprocessing of GNSS (GPS) coordinates series started in 2008 and will be continued to assess the long term stress build-up. Students maintain the seismic stations installed at or near their schools and provide valuable scientific contributions via their motivated and unbiased access to the interactive and computer-aided analysis of the seismic data. Through this project they have gained a sound understanding of earthquake phenomena and their impact on the society.

Within the framework of the additional Citizen Science element “QuakeWatch Austria” citizens were included in the recording of impacts of earthquakes via a smartphone app and low-cost acceleration sensors in order to better assess the earthquake risk in Austria. The YSC pilot project was led by the ZAMG.