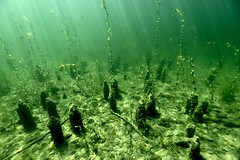 Objects and Narratives in the context of prehistoric Pile Dwellings

The lake villages in Upper Austria and Carinthia was a central topic of discussion for the research project "Doing World Heritage – grasping World Heritage". The Prehistoric Pile Dwellings around the Alps were part of the UNESCO World Heritage list since 2011. Objects from this unusual archaeological sites occupy a key position, as the prehistoric settlements of up to 6000 years old are hidden below the water surface and have not been able to be visualised adequelyt.

In this project, archaeological finds were selected together with pupils as reference objects. These items will not only become a topic of conversation, interpretation and a link to a former local heritage, but will also function as actors in a social practice of production, conveyance and representation of World Heritage sites.

The students were introduced to the basics of qualitative empirical research for the purposes of gathering object data, and will also establish a repository of local and regional knowledge together with scientists. Throughout this joint analysis, new information and interpretation of object data will be generated.

The project aims to bridge the gap between cultural and technological sciences, and overcome a historically evolved, but somewhat outmoded separation between different scientific fields. By capturing and designing the World Heritage with modern technologies (using laser scanning and 3D printing) pupils and scientists worked at the interface between materiality and immateriality. Based on these methods, an intensive examination of the question of authenticity and integrity of culture were carried out.

The process and results were documented and presented together, and products (open content license) are were generated for valorisation. Furthermore, new elements of interaction were designed for the regional educational programs of the UNESCO World Heritage Prehistoric Pile Dwellings around the Alps in the Salzkammergut and in Carinthia. This will provide opportunities for public participation beyond the duration of the project.