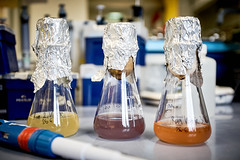 Biodiversity and ecology of freshwater bacteria

The genus Aquirufa, discovered and scientifically described in cooperation with school classes, is the midpoint of this project. Aquirufa is a widespread and frequent group of bacteria in freshwaters and plays an important role in the functioning of these ecosystems.

A team of the Research Department for Limnology, Mondsee (University of Innsbruck) in cooperation with Haus der Natur, Salzburg, and the German Collection of Microorganisms and Cell Cultures, Braunschweig will work together with various groups of citizen scientists to study the distribution, ecology, and biodiversity of Aquirufa in freshwater habitats in Salzburg and Upper Austria.

The project should impart knowledge about the importance of microbial activity for our freshwater systems to the involved citizen scientists, as well as to a broader public. Bacteria are responsible for the material cycles and involved in the primary production, our ecosphere could not exist without their metabolic activity. In contrast, little is known about the players and their ecology. Probably several million bacterial species exist, but only a little over 20.000 species are scientifically named and described. Until now this enormous biodiversity remains mainly unexplored.

During the project six school classes, as well as additional groups of citizen scientists, will take water samples from self-chosen freshwater habitats and will handle them under the instructions of the project team. To achieve the scientific aims of the project modern molecular technics, like high throughput sequencing of marker genes and genome-sequencing (of the obtained bacterial isolates), will be used. Furthermore, newly discovered Aquirufa species should be scientifically described. Here the citizen scientists will be actively involved in the whole research process, from the first beginning up to the publishing in scientific journals. Besides participation in the laboratory work, the creative contribution should be the selection of aquatic habitats for sampling and the creation of Latin-based species names.
(Photocredit © Alexandra Pitt)