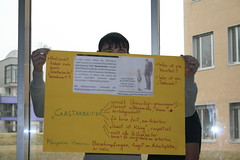 Mediating migrant societies -Tracing the discursive constructions of transnational identities between the poles of selfing and othering among young adults in Vienna.

MiDENTITY strived to explore the spatial moorings and imaginaries high school students from Vienna discursively mobilize to negotiate and communicate their sense of national, ethnic and socio-cultural belonging. The main matters of interest are: - Do learners from Vienna define themselves primarily as Austrians, Turks, Chileans, Viennese, residents of a specific district or street, or do their notions of selfhood point towards intersectional strategies of self-placement? - What values, traits and group stereotypes do they attach to the (multi-local) identities of themselves and their peers and how do these attributions relate to mediated representations of “selfhood” and “otherness” that may problematically inscribe social-cultural, national and spatial markers of difference between groups and individuals?

Over the last decades, the Austrian society has been shaped by migration and the proliferation of the mass media, with a surge in social media use more recently. Questions of belonging and social differentiation are increasingly negotiated via powerful systems of communication, which can both influence and illuminate how the cultural understanding of societies is organised. MiDENTITY aims at empowering learners to critically analyse relationships between the media, identity formation and power, helping them develop the capacity to critically reflect on everyday practices of media consumption and production.

Central to the project was the close collaboration between researchers, teachers and pupils to adapt and further develop methods of socially conscious semiotic analysis (e.g. multimodal critical discourse analysis) for the strengthening of civic education in the Austrian classroom. Initially, a questionnaire and group discussions were employed to gain an understanding of how pupils negotiate the socio-cultural subjectivities and spatial identities of themselves and others regarding notions of ethnicity and place. Where instructive, results were subsequently correlated with available narratives of ethnic spatialisation and nationalised representations circulated in the media. In a workshop format, pupils were encouraged to understand subjectivity and identity as contingent, culturally specific productions that are based on the interplay of discourse, representation and power. Learners critically revisited their concepts of personhood and social identity and – if desirable – envisioned them in socially more inclusive ways. As part of this project, pupils were motivated to engage in alternative media production in socially meaningful ways. The insights gained are served as a basis for the further development and implementation of critical media literacy / civic education in teacher training, classroom teaching and peer-mentoring.