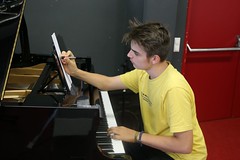 Of singing Christmas trees and other presents

Silent Night - in between scientific and artistic demands

How can processes and products of aesthetic creativity be evaluated? What can young people contribute in this context with the observation, description and appraisal of their own activities? Pupils of two schools in the county of Salzburg and a team of music-pedagogues and musicologists of Mozarteum University Salzburg were brought together so as to answer these questions with a combination of creative and scientific approaches.

The artistic creativity as well as the critical reflections of pupils of BORG Gastein and Oberstufenrealgymnasium Oberndorf are challenged by the famous song “Silent Night”. The notes of Joseph Mohr, taken down round the year 1820, represent the oldest autograph of a song that quickly found its way into the ‘old’ and ‘new’ world. “Silent Night” – translated into ever so many languages – has become an integral part of the tidings of peace on earth, first announced by angels on Christmas Eve, and has been accepted as a cultural heritage of UNESCO. Manifold legends and anecdotes are centered round the creation of the song, performed and recorded in a great variety of different arrangements. Attempts at placing the famous melody in new contexts partly ignore the intentional bonds and have made the song part of a profiteering that starts months before Christmas. Nevertheless it can be assumed that the sound of “Silent Night” in midnight services on Christmas Eve can convey a touch of the profound emotions and affections evolved by the musical performance of Joseph Mohr and Franz Gruber on Christmas Eve 1818 in the church of Oberndorf.

Six interrelated subjects had been chosen in our approach.

• The history of its creation – legends and anecdotes centering round the song.

• The text – basis for modifications and alterations (especially in the pursuit of political aims).

• “Holy infant, so tender and mild” – the image of the Redeemer expressed in the song and in acoustic and visual models inspiring its creation.

• The melody – between creative attempts at actualizing the song and trite modifications and transmogrifications.

• A song ‘conquers’ the world – the international reception of “Silent Night”.