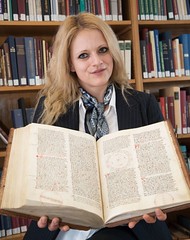 Working Materials for the Styrian Paths of Medieval Literatur 3D

The Working Materials project has always considered itself not only as an addition to the Styrian Paths of Medieval Literature and their cultural and educational tourism program, but also as an initiative to conduct its own research in the field of didactics, to figure out effective ways and methods for teaching medieval German literature – in school as well as under the perspective of life-long learning processes. During two previous terms of the project, pupils, students, teachers, and scientists developed and tested a variety of teaching materials for different grades to give learners access to the world of Styrian medieval literature: The project’s Textportal provides a virtual learning environment, which enables users to independently exploit and translate the medieval texts. It also contains a wide range of media and materials for teachers.

Based on previous results the third term of the project explored further prerequisites and dimensions of literary learning with medieval texts. In this context literary texts were seen as knowledge resources and catalysts, which were investigated jointly by scientists, learners and teachers to convey them within cultural mediation and school education. For this purpose pupils, students and scientists developed a mixed-methods approach survey to look into the acquisition of knowledge as related to reading processes.

Students of secondary schools and of the University of Graz edited the selected medieval texts from the Styrian region for the virtual learning environment, they identify and investigate inventories of knowledge from different areas of interest (i.e. regional history, law, medicine, animals, nutrition, craft). By cross-linking the findings with other texts of the period and with existing databases complex connections could be visualised for learners and deep insights in the medieval conceptual world are possible, so that variable learning processes can be initiated. The materials are adapted for different target groups including the younger pupils from primary and secondary schools.

Based on the outcomes, the exhibition #dichterleben was refined and seperated into five independent author modules for the different locations in the surroundings of the Styrian Paths of Medieval Literature, in order to make them a sustainable lighthouse project of literary awareness and of life-long learning.