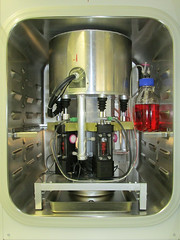 Gripping reactions in the bioreactor: Impact of inflammation-related mediators on tendon health.

The number of people suffering once in their lifetime from a tendon injury is steadily increasing over the past. This is in part due to an increased life expectancy and altered recreational activities. Tendon ruptures preferentially occur in degenerated tendons when exposed to high tensile load. For surgeons and orthopedic surgeons tendon injuries remain challenging as they possess a low inherent regenerative capacity ultimately resulting in the formation of a functionally compromised scar tissue. The etiology of tendinopathies is still widely unknown, but it appears to be multifactorial. Besides an increase of asymptomatic micro-ruptures also age associated alterations at the cellular level promoting tendinopathies are being proposed. Additional risk factors for the development of tendinopathies are diabetes, obesity, smoking and autoimmune diseases such as rheumatoid arthritis and psoriasis. All these diseases are accompanied by a systemic, subclinical inflammation which is defined by a 2 to 3 fold systemic increase of pro- and anti-inflammatory cytokines as well as several inflammatory markers.

The aim of the project was to study the influence of these inflammatory markers on tendon structure and biomechanical properties and to analyse the factors released by the tendon into the culture medium upon addition of inflammatory markers and cyclic loading. To this end an already realized bioreactor (in HTBLuVA) Salzburg) was adapted by the students to allow controlled sampling and storage of cell culture media. Moreover, an optical-based sensor was established, allowing the precise determination of tendon dimensions, which is a prerequisite to calculate the tendon elastic modulus. Both rat flexor tendons and scaffolds seeded with tendon cells were used for the experiments. The tendons and scaffolds were cultured for several days under defined conditions and were stimulated by low doses of various inflammatory factors. During this process, the tendons and tendon constructs were subjected to cyclic mechanical load, in order to examine potential synergistic effects. Both tendon and medium samples were withdrawn and stored at defined time points and subsequently analyzed by molecular biology and histology.

The results of this study provide profound insight into the effects of inflammatory processes on tendon quality and thus may pave the way for novel treatment strategies.