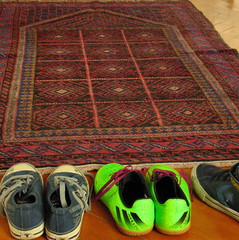 In the mass media, in statements of politicians as well as in the broader social and public discourse, stereotypes and bias toward Muslims and “the Islam” prevail. They are mostly expressed by non-Muslims, while the voice of Muslims in the public is comparatively faint and the socio-cultural variety of Muslim life remains largely unknown. The project was based in three Viennese schools, the Islamic RG Vienna 15, BRGORG 15 Henriettenplatz and GRG 10 Ettenreichgasse, and was implemented with students of the 6th and 7th grade. Applying methods of social anthropology and culture studies, it focused on Austrian Muslims’ manifold ways of living, how they practice or don’t practice Islam as part of their social and cultural life. It investigated how Muslim and non-Muslim students live together in intercultural settings within and outside school.

The students were engaged both as researchers and as subject of research. A media analysis focused on the representation of Muslims and “Islam” in a national and international perspective. The results of the media analysis were confronted with the students’ practices and discourse. Through video interviews, the issues gained in this process was elaborated on an individual basis. In a next step, the scope of research was extended into places and spaces outside school that are frequented by the students as well as through involvement of further interview partners and discussants.

The research process was documented by video recordings. These recordings served the scientific analysis and evaluation of the project. They enabled the pedagogically designed publication on a webpage, while the presentation at the Austrian Museum of Folk Life and Folk Art reached out to the wider public.