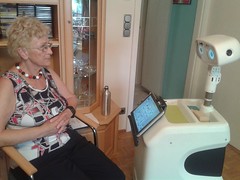 ICT and Robotics as Bridge between Generations

The project iBridge represented an intergenerational project, which aimed at increasing the interest of young people for research in cross social and cultural scenarios as well as for technology and innovation. Besides, also their relation towards natural sciences and engineering shall be intensified.

For achieving the higher interest in research and technology, the innovative concept of a “sensitive cuddly toy” was used as well as the programming of service robots (e.g. autonomous hoover) and the usage of robotics for supporting elderly people (e.g. the assistive robot “Hobbit”). On the other side of the age spectrum, technical high school students supported elderly people in using modern technologies in the framework of PC and internet courses. Especially the young generation – the digital natives – profited by gaining knowledge about the problems of elderly people and about topics such as save and accessible technologies for defining solutions for service and assistive robots of the future – intergenerational, gender specific and independent of social or cultural background!

After inspiring the interest of the young people and supporting the older generation towards modern technologies, intergenerational workshops were planned for creating concepts for service and assistive robots. The development of the distinct parts of the concept on the basis of the “sensitive cuddly toy” as well as “Hobbit” were carried out by groups of technical high school students that are supervised by the researchers of the Practical Robotics Institute Austria (PRIA) and the Vienna University of Technology.