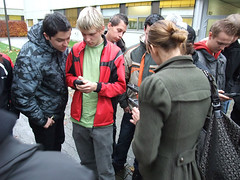 “Applications on the Move“

Development of a mobile gaming application for young people. Location based games from students for students

Since 2006, the Carinthia University of Applied Sciences, Department of Geoinformation organizes GEOGAMES annually with the aim to show the application of GIS in practice in a playful way. Therefore, students should get an overview of the GIS world and further they should learn to handle Geoinformation systems (GIS) based on examples and tasks. Through the support of Location Based Games interest should arouse in handling location based data. “Many adolescents spend too much time at home in front of their computers and do less exercise. Location Based Gaming will support and stimulate playing outside in nature again. Therefore, it is important that students are involved in the development of the play platform from the beginning”, says project manager Dr.-Ing. Karl-Heinrich Anders, professor for Geoinformatics at the Carinthia University of Applied Sciences.

For students it is a main problem to develop interesting ideas for games. Therefore, the idea was born that students should develop such location-based games. This idea was realized through the research project Applications on the Move. This project, which started in December 2008, was funded for two years from the Austrian Federal Ministry of Science and Research in line with Sparkling Science. The background of this project was shaped through the term ‘Location Based Service’ which is a main focus of the Carinthia University of Applied Sciences, Department for Geoinformation as nowadays the importance of this term increases throughout. Behind ‘Location Based Service’ lies the reference of multilayered information based on the actual position. Known applications of ‘Location Based Service’ are for example navigation systems or information about the location of the nearest pharmacy or supermarket that can be accessed through a mobile phone.

For this project, the department of Geoinformation was cooperating with the “Höhere Technische Bundes-Lehr- und Versuchsanstalt Villach” (HTL). “The cooperation between the Carinthia University of Applied Sciences and the HTL in Villach brings only advantages as the HTL provides important input with the ideas of the students whereas the Carinthia University of Applied Sciences manages the necessary know-how for the planning and implementation based on the technical expertise”, says DI (FH) Christoph Erlacher Msc, research assistant in the department of Geoinformation.

The main aim of “Applications on The Move" was the development of a modular, generic Location Based Service application, which should form the basis for future applications.

Students from the HTL had the opportunities to work on current research topics such as location based service. Six ideas for games had already been developed by the HTL and these ideas were presented within a workshop on the 19th December 2008 at the Carinthia University of Applied Sciences. The students were in the stage of implementing the first prototype, which was presented at the GEOGAMES 2009.