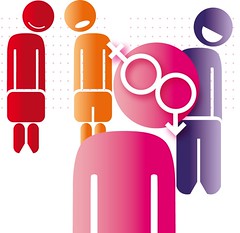 How gender relations and roles are constructed, designed and lived – an investigation of students and teachers in the context of German classes

In this project, high school students worked together with teachers and academics in investigating the construction and deconstruction of gender relations in everyday life at schools as well as at university. Developing gender competence, applying critical reflection, and acquiring a larger set of methods and approaches were the major objectives of this Sparkling Science project. Finally, the project wanted to initiate strategies that can make gender fairness and gender sensitivity realizable in schools, which are important social areas.

In several modules, academics and students got the opportunity to learn from one another and to do research work in schools and at the University of Vienna, one of the highlights was a project week at the German Department in February. On the so-called Action-Research-Days students have been given new impulses, for example by acting and interacting in gender-scenarios using both the media and the theatre for inspiration.

Another endeavour of this project was the development of a ‘gender-disc’ based on the students’ experiences. Students from the New Design University of St. Pölten co-operated with the high school students and input their expertise. At the end of the project the gender-disc was presented as a new type of teaching material.

The project team cooperated with three Viennese schools: GRG Rahlgasse (7th form); GRG Auf der Schmelz (6th form), and the International Business College Hetzendorf (7th form). As (Un)doing Gender was focussed on language, politics, and performance, the interaction among students and their teachers was the central point. Teaching German as a first or second language integrates language and cultural approaches, which made German classes particularly suitable for discussing gender and examining it closely. Philological and didactic approaches have been interlinked.

(Un)doing Gender looked into the moments of empowerment of social interaction and put an emphasis on the various ways of transformation. The project was innovative in the action-related and user-oriented approach that it takes thus making students aware of gender roles and gender identities.