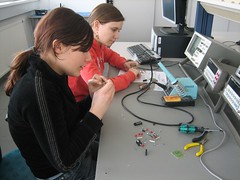 The Innovation
The title of this project – “Pupils develop learning assignments for biology and chemistry regarding their personal learning style and gender aspects” – might sound simple but to the pupils it means a totally new form of learning and researching. During the project high school pupils from six classes in three different grammar schools in Klagenfurt developed assignments for secondary school pupils in the field of Biology and Chemistry.

The aim was to find out whether girls develop different tasks than boys and whether or how different learning styles affected the form of an assignment. The topics dealt with during the project were obtained from the curriculum. The difference between project-involved and non-project-involved classes was in the form of dealing with the subject matter. This project emphasized independent work by the pupils.

The first year of the project
At the beginning, the research focused on the circumstances under which the pupils learn best. Is it possible to distinguish groups of certain learner types? In the first lessons the teachers and workers from the NAWI-centre instructed the pupils and helped them get started on their project. The aim was to expand on rough drafts of the assignments. Afterwards, groups were formed according to learning style and gender and, with their attendants, developed their own assignments. The pupils tried to develop learning assignments with difficult contents regarding their personal learning style. At the end of the project year the developed ideas were used in practice in the classes of secondary school I (10 to 14 year old pupils). The young researchers could take part in the classes and thereby immediately receive feedback on the work they've accomplished. At the conclusion and as project highlight, a common workshop for all pupils, who participated, was held at the University College of Teacher Training, Klagenfurt. All participants received certificates to confirm their accomplishments in the subject didactic science.

The second year of the project
In the second phase of the project, selected pupils optimized and then published the assignments under the didactic supervision. The participating pupils and researchers faced a totally new work structure. In small groups up to four persons the youngsters had the possibility to learn the basics of scientific publication under the guidance of the NAWI-centre-workers. As a special acknowledgement, the pupils received a service contract and financial compensation. The finished work was published in the pupils' names and it should encourage them to future scientific activities. The pupils were mostly looking forward to this project but there is also a little doubt whether all pupils were mature enough for the task. This concern proved that the pupils want to approach this project professionally and that they were aware of the important task ahead. The teachers and researchers, at their own admission, were also encountering partly new experiences.