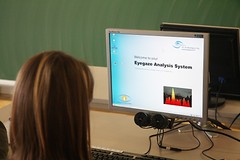 Together with scientists of the FH OÖ, Campus Steyr, and teachers of schools of higher secondary education, students investigated the impact of computer games, TV and cinema, the Internet, and mobile communication on their peers.

New media and technologies have become a common part of everyday life long since and it is apparent that dealing with them influences adolescents in manifold ways – both positively and negatively. However, scientific findings in this field are, lamentably, still very heterogeneous. Especially the question of a relation between virtual and real violence is highly significant and intensively concerns our society: no massacre, no brutal robbery, no brawl incited by adolescent perpetrators that would not raise the issue of media usage and its possible effects on an increased propensity for violence.

The importance of this issue prompted the scientists Prof. (FH) Dr. Andreas Auinger, Prof. (FH) Dr. Harald Kindermann, and Mag. (FH) Andreas Greiner to participate in a tender launched by the Federal Ministry of Science and Research. They found ideal partners for the implementation of their project: two secondary schools in Linz (Georg von Peuerbach and Europagymnasium Auhof) and two vocational secondary schools (Kirchdorf/Krems und Rohrbach).

The research project MeTeOr aimed at conveying the fundamental methodical knowledge to adolescents of the four partner schools within one school year. Together with the scientists, they should become capable of observing their fellow students and performing experiments by means of electro-physiological measurement procedures. The results should consequently provide clear indicators of type and degree of influence.

Adolescents aged between ten and eighteen use electronic media as naturally as they use fork and knife for eating. However, they often do not reflect upon the implied influence which the media impose on them. Specific questions and their joint formulation should render such influences apparent and made the students aware of them.
For example

The answers to these questions should also provide, among others, approaches to public institutions on how they can regulate age ratings for games, and when they should apply them. The conceptual design of the measuring instruments and the development of the experiments were done in coordination with student groups and FH researchers to guarantee a scientifically correct methodology. Participation in the project could also contribute to Matura projects in which mathematics, informatics, German, ethics, and psychology are combined in an interdisciplinary approach.