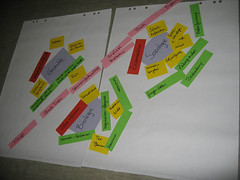 Tricks of the Trade. Social Research with Pupils

Students and scientists research places of learning and knowledge

“What do you think of science?” The project “Tricks of the Trade” wanted to throw light on developing and clarifying this question. The pupils tested methods of qualitative research, such as interviews or participant observations, and investigate social spaces of learning and knowledge production: After the observation and analysis of their own school, the projects continued in a second phase with observing a scientific research lab. This was important to bring up the issue of “situated knowledges” and to question seemingly given factors.

The joint research helped to develop a critical, reflecting attitude towards their own surroundings and therefore opened up courses of action and competences concerning science and research for the involved pupils. On the scientific level, the project aimed at reflecting and further developing methods of participatory action research: These methods were tested together with the pupils and applied to the school context. Furthermore, questions concerning gender, class and ethnicity within knowledge acquisition processes were asked.

Therefore, analyses of intersectionality in regard to gathering knowledge were a main issue of the project. As participatory action research changes the social space it investigates, self reflection on a theoretical and methodological level played an important role.