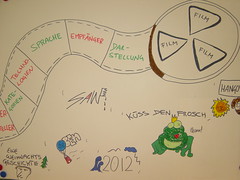 The objective of the project „Mediagarden“ is the empirical research of the media-cultural self-image of three- to six-year-olds in Austria. This research is to be realized by future kindergarten teachers who attend a school for preschool education, a so-called BAKIP. This schooltype in Austria is a vocational school with higher education entrance qualification. The scientific research is to be done by a qualitative method against the background of the media-generation-theory with a view of the media habit.

Based on the appreciation of everyday life as a media world (Schorb 1995, Baacke 2001) teenagers are often interviewed about their media culture. On the other hand we don’t know much about children’s media culture, as they are hardly ever interviewed themselves, or researches put their focus on interviews of the parents (e.g. Kübler/Swoboda/Elling 1998, Guth 2007). Interviews with children are rarely done (Braun/Charlton 1989, Holler 2005) and they usually don’t consider the children’s dealing with computer games. One of the aims of the project „mediagarden“ is to make a contribution to this topic.

The scientific researches concerning the project „mediagarden“ happen against the background of the theory of the media generation (Schäffer 2003) and of the media habit (Swertz 2003, 2007). Developing positions of the different generations and the constitution of the media habit are going to be described. This will lead to an important contribution to the theoretical development of media-teaching in kindergarten. Furthermore the research will give practical informations for the media-teaching in kindergarten.

Due to the methology it is important for the scientific research of the media-cultural self-image that the interviewed children are able to expatiate their dealing with the media. Concepts for suitable methods for the interviewing of three- to six-year-olds have been made at the university of media-teaching in Vienna and have been tested there. These methods are going to be developed by the BAKIP-students, based on their own experiences. As BAKIPs mainly are attended by women, the project „mediagarden“ also intends to support women’s interest in science. Besides, persons involved in the project work at methods for the self-reflection of media habits. Future kindergarten teachers shall be encouraged to deal with their own media habits and with media-education in kindergarten. This is going to be the most important subject for a future cooperation of the involved institutions.