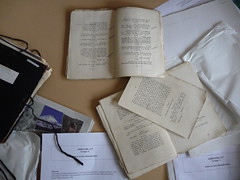 Thanks to Sparkling Science, the Brenner-Archives are able to bring research and archive work into the classrooms for the first time. In the course of the project pupils will not only get familiar with the genre of folk theater (folk play) but will also be provided with the opportunity to acquaint themselves with a possible future field of work by actually working in a scientific context. A first meeting with the pupils at the beginning of November 2008 included an introduction concerning the topics and contents of the project. A rather brief presentation of the Brenner-Archives and its work as well as the prospect of many common activities, such as the visit of the “Telfser Volksschauspiele” (“Telfser Folk Plays“) and the chance to work with the University of Innsbruck aroused the pupils' interest and curiosity alike.

Pupils are curious about the project “Mrs. Munde's Deadly Sins”, since it tries to show that the literature of their homeland has a lot in common with what they may consider as „world literature“ regarding topics, motives, and subjects. The discourse of “Heimat”, meaning homeland or roots or identity, is also part of the debate in another project at the BRG Telfs. The Comenius Project is dealing with „Identity – Region – Europe” and the question of identity between region and nation. Thus, “Mrs. Munde's Deadly Sins“ will be a valuable contribution to the debates already at stake. The results of this co-operation between both projects (Comenius and Sparkling Science) will be presented at the BRG Telfs and will be compared to those of the Comenius partner schools (Werdenfelsgymnasium in Garmisch, Liceo Francesco Petrarca in Triest).

Two dramas will be read by all pupils participating in the project: The first one “Stigma“ by Felix Mitterer will be read together whereas the second one “The Seven Deadly Sins“ by Franz Kranewitter will be divided up and read in groups.

To what extent the topics and subjects of contemporary folk plays will be of both personal and general interest to young people will have to be discussed in the course of the project. Regarding the effect and work of literature archives, the pupils seem to understand already that there is more to preserving and passing on of literary and cultural heritage than just collecting old manuscripts.

However, it is most important to the pupils to gain experiences in the “world of science” and to get the chance to meet actors in person. Thus, apart from theater visits and working at the Brenner-Archives, pupils will work hard, i.e. they will interview authors and actors, will write reviews and comments – they will roll up their sleeves, for sure!