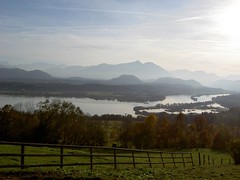 “My featured space 2025” was focussing on life quality in rural regions in the future. Together with researchers, teachers and stakeholders pupils from the Alps-Adriatic region developed scenarios for rural living spaces in 2025. The main question was, what will pupils need in the future to live and work in attractive rural regions. “My featured space” was an interdisciplinary and transdisciplinary research project.

First, the pupils documented their present living space with short videos referring to the methods of qualitative social research. The pupils defined parameters for the quality of life in the rural spaces analyzing these videos. In the next step mutual effects between these parameters were described following the method of sensitivity-model by Frederic Vester. Also, the relevance and completeness of the parameters was checked.

The goal of the next step was to identify some highly active parameters in the system. Using this model, pupils developed and designed their visions of an attractive living space. They also learned to understand interactions in the complex system “rural region”.

The model was finally implemented into a computer-simulation-game “My featured space 2025”. The computer-game visualizes scenarios of attractive living spaces. Together with the Institute of Information Systems of the University of Klagenfurt the pupils developed the computer-game.

The project results were presented as final reports, dissertations, as well as project presentations for various events.