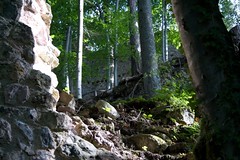 The well-known and formerly large “Rottenburg” near the village of “Rotholz” in Tyrol was built in the Early Middle Ages. After its demolition it was rebuilt around 1460. Today only a ruin, that has been restored recently, exists on a hill above the Inn valley. Even though the “Rottenburg” was one of the most important fortresses in the Tyrol, not much is known about this castle. Especially the “oldest castle” has rarely been investigated, but also from the “newer one” very little information can be found in the literature.

In the frame of this interdisciplinary project information on the eventful history of this castle were one major topic. Historians – together with pupils – tried to shed light on the history of this castle and its residents. Therefore historical sources were searched and interpreted and drawings as well as pictures studied.

Also natural scientific investigations were a central topic: especially the building material of the fortress was investigated in detail – where does it come from? When was it built-in? Where did the material from the destroyed castle come to? What was it used for? Also in this part of the project pupils were involved. By these investigations we hoped to identify the building material, to locate the historical quarries where the material was quarried and to understand and document the use of the material. With geophysical methods we hoped to detect remains of underground walls to get a better idea on shape and structure of the ancient fortress. These results were used, together with historical, geological and building historical findings, to reconstruct the building phases of the “Rottenburg”.

The project was understood as an interdisciplinary archetype of research in which researchers of different scientific fields interacted and findings complement one other – and pupils accounted an important part.