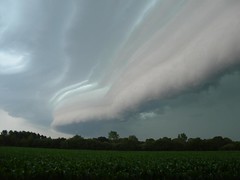 Students develop the basis of an archive on extreme weather phenomena

Meteorology today has a large amount of automatically generated observations, but these data do not contain any pictures of weather phenomena. Especially with extreme phenomena like strong rain, storm, and others the picture describes the event, which caused the damage in the best and most efficient way. This material often exists in the collection of photographers and amateur meteorologists, but there is no accessibility for the scientists to this material. Conversely the authors of these photographs lack the explanation to understand the phenomena they documented.

Meteopics tries to merge these two worlds of different perceptions and to create for science, teachers, and students an archive material, which can be used under very different preconditions and entry points. Within the framework of meteopics students take pictures of extreme weather events and upload them on the platform. Scientists comment these pictures directly online and transform the archive to a living document.

By adding keywords, location, and time to these pictures emerges not only a gallery of impressing snap shots, but also a database, which has a very high value for science itself. Weather phenomena, which are difficult or impossible to record through the conventional measurement network can be assessed, archived, and interpreted in a more useful way. Results and effects of Climate Change can be documented by understandable pictures. Students ask the scientists questions and receive direct answers. The best pictures will be selected in a competition and receive attractive prices and awards.

The material gained will not only serve science, but also support the school syllabus and be open to the general public.