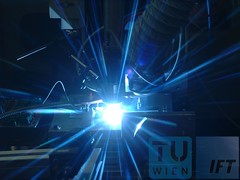 It is the objective of the project to develop a process combining the cutting and joining of technical textiles based on thermoplastic fibres by use of high power laser technology.

The welded joints will be absolutely liquid-proof. This property is a requirement for numerous applications of textiles like for instance for functional wear or industrial textiles.

Laser cutting of textiles is a well established process in industry. Welding of thermoplasts is a rather new process due to the limited suitability of the classical CO2 laser. Especially laser welding of textiles is being made use of only in special cases and only recently.

A combination of both processes could be commercially advantageous. A simultaneous cutting- and welding-process can be carried out by the use of one or two laser beams. The method with a single beam induces sufficient energy at the trimmed edge that the material vaporizes. A narrow strip alongside the trimmed edge will be heated up by conduction sufficiently to be molten but not pyrolysed. A critical issue could be the inhomogeneous heat conduction, preventing an overlap of areas of thermoplasticity of both layers, or an extreme temperature gradient practically reducing the area of thermoplasticity to zero.

If it has to be concluded during laboratory testing that the single beam method turns out not to be feasible, it will be replaced by the double beam method. A beam splitter will be used in such a case, providing one beam for the cutting and the other for the welding purpose. The advantage is facilitated handling, while it incurs increased expenses for the more complicated set-up.