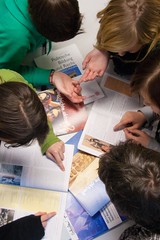 A critical analysis by students, teachers and researchers

The documentation and critical analysis of migration narratives and representations of people with a migrant background in current Austrian textbooks are central to the project “Migration(s) in Textbooks.” The main research questions include the following: “Which Austrian and European migration histories are narrated in the textbooks?”, “Which stories are marginalised or even ‘forgotten’?”, “How are people with a migrant background depicted?” In this study, the widely varying perspectives of teachers and students alike on the topic of migration and their experiences with textbooks are used both methodologically and analytically. Such collaboration between researchers, teachers and students is not only an innovative and promising approach in textbook research in general, but it also reduces the danger of over-emphasizing the researcher’s view of the topic.

In this study, students of eight classes (different school types and age groups) in two Austrian cities (Vienna and Salzburg) will analyse their own textbooks in workshops which are moderated by the researchers. The text analysis and the investigation of visual representations will be done in small groups; the results will then be reflected in moderated group discussions. Subsequently, the results of the workshops will be contrasted and brought together with the findings of the researchers. The analysis as such is based on a methodological triangulation which has already been applied by the members of the team in their previous work with textbooks. The triangulation includes qualitative content analysis (Mayring 2007), critical discourse analysis (Jäger 2009), and text/context analysis (Hornscheidt/Göttel 2004). The method will be further developed throughout the research period so that it can be used by teachers and students afterwards without the assistance of researchers for future analyses of textbooks or other media.