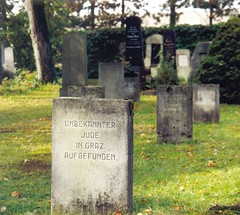 After the Shoah, Jewish Cemeteries often have been the last remnants bearing witness to the once prospering and today almost completely destroyed Jewish culture in Europe. Due to the consequences of the extermination of Jewish life the question of the cemeteries’ preservation and care is today not merely a Jewish matter but rather a matter of public concern. Scientific and public activities are important to keep Jewish culture, life and history in the collective memory.

Beside these aspects of memory the scientific work on Jewish Cemeteries gives us eminent insights into the cultural and social history of the Jewish Communities. Thus we gain new information on the time before the Shoah – information not known before because of the lack of documents.

Based on thorough scientific investigation, this project is dealing with aspects of memory. On the one hand, for the purpose of preservation and visibility, it focuses on the photographic and scientific documentation, the art-historically description of the Jewish cemetery in Graz with all its buildings, monuments and gravestones. On the other hand the biographical analysis of the gravestones gives important insights into the social structure and religious orientation of the former Jewish Community. This way we will gain more information on Jewish identities in Graz.

The aim of the project is to do research on the culture and social history of the Jewish Community in Graz during the last two centuries. The results will be presented to the general public in an exhibition and in a publication. Moreover this project is to be the beginning of a new way of cooperation between the university and schools.