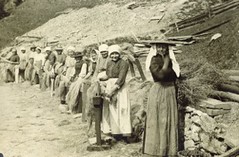 Landscape and You-th
An Oral History Project on Local Knowledge, Language and landscape

The project „Landscape and You-th“ focused on the relationship between local knowledge, language and landscape on the basis of cultivation and manufacturing the cultivated plant flax at the Lesachtal / Kaernten.

Landscapes develop out of the interaction of natural processes, cultural and economic factors and human perception. They are constantly developing and serve different functions such as offering space for living, economics and recreation as well as appreciating nature and culture. Landscape is an area which is perceived und experienced as such by people and whose character is the result of an interaction of natural and/or anthrophogical factors (Council of Europe 2000). Typical characteristics of a region such as language and traditions could also be part of this perception.

Each year on January, 5th the children of the Lesachtal in Carinthia go to the Haalangreiten - which meaning does this tradition have in connection with the cultivation of flax? Why is the Brechlhütte in Maria Luggau owned by several farmers as owners? Why were men not allowed to enter it during flax conferting?

Very little traditional knowledge in the Carinthian Lesachtal has been documented in a written form. Up to the 1960s flax was an important part of the self-supply in the Lesachtal. It was an important primary product for the linen weaving and did deliver high quality oil. Cotton and synthetic fibre replaced flax as raw material for clothes. The labour intensive cultivation became increasingly unprofitable in alpine farming. Remnants of this kind of land use are still visible today, such as the Brechlstube and the oil mill in Maria Luggau. Today oral history interviews are still a form of access to the local cultural history of the Lesachtal. It´s the only way to get this kind of information because most residents haven’t kept diaries or other forms of recollection as this kind of knowledge is not considered as a collective value for the future. Daily living conditions and their interpretation can be reconstructed by oral history interviews.

Students from the Mittelschule Lesachtal and the HBLA Hermagor were instructed in this method and were then able to interview elder inhabitants from their region about the ancient cultivation and manufacturing of flax and its significance in daily rural life. The transcription of the interviews offers a reconstruction of the spatio-temporal dynamics of land use as well as its socio-economic context.

The results of these interviews formed the basis for a self-guided audio tour compiled by the students. This tour is supposed to serve as an acoustic archive of the agricultural hands-on know-how of flax – as well as a means for the socioscientific research of landscape and for the practical use for locals and tourists in the Lesachtal. The generated interactions between humans and landscape- concerning the eyewitnesses as well as their young interviewers - were analysed in regard to cultural and group specific meaning in the context of place-identity.