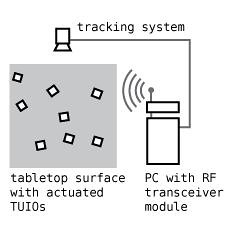 In recent years "Tangible Computing" has evolved to an active area of research in the field of human-computer-interaction. Its intention is the design of intuitive and meaningful user interfaces by linking virtual and physical real objects: virtual objects are represented by physical objects, which enables experimentation and enhances interaction by feeling and physically manipulating objects.

Tabletop Tangible User Interface Objects (short TUIOs) are typically used on an interactive work surface. Almost all existing systems utilize physical objects in interaction tasks for input only, enabling the user to communicate changes to the system. Changes of the virtual objects on the other hand are not reported to the user in a similar way, since existing TUIOs do not have any output channels. They are not able to reposition themselves automatically on the working surface for instance. Self-positioning TUIOs, so-called "Actuated TUIOs", have been researched only sparsely so far; all existing solutions have significant technical limitations.

In the course of this project new and highly modular Actuated TUIOs were developed. In collaboration with students they were equipped with flexible extensions. Tangible interaction is very motivating, especially for children and adolescents, which makes it ideal for educational applications. In educational applications, which were conceptualized in close collaboration with students and teachers, actuated TUIOs as well as the new and intuitive interaction techniques based thereon were evaluated.