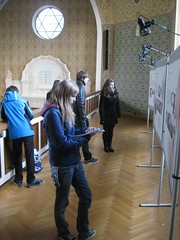 The End of (My) Childhood?

Historic research on the rescue of approximately 2.800 Jewish children and youths via the so-called Kindertransporte (Refugee Children Movement) from Austria during the years 1938-41 was the starting point of this project which questioned definitions and criteria of childhood.

The first subproject used the anonymous analysis of an interview project at a 6th grade school class (approximately 25 students) as a frame to understand the criteria of individual childhoods and their ends. In the second subproject three school classes from two partnering schools (one 6th grade and two 7th grades, altogether approximately 75 students) analyzed video- and audio-interviews as well as memoirs of former Austrian Kindertransport – children. Questions on the perception of inconsistencies, strategies of conformance to new environments, integration as well as the process of remembrance were the focal point of this project. The students’ cognitive process was also taken up. The third subproject (dissertation by Merethe Jensen) looked into the Kindertransport from Austria to Scandinavia which has been almost disregarded by modern research; results from the students’ research were included in the chapter on “the End of Childhood?”.

The students received an introduction to historic and social science research, developmental psychology, the analysis of autobiographic texts and the methods of oral history and interview techniques in interdisciplinary workshops. In oral history interviews with former Kindertransport – children as well as in workshops and at the final conference the students could apply their knowledge on interview- and presentation techniques.