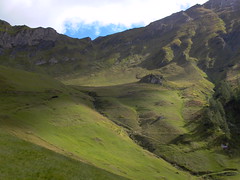 Nevertheless dwarf shrubs and/or matgrass are being spread on mountain pastures and former meadows and displacing pastures rich in biodiversity. The result is abandonment of land use. If alpine dwarf shrubs such as alpine roses or juniper are mowed without accompanying measures such as soil liming or fertilizing, mostly "secondary spreading" with blueberries or cranberries occurs. Areas with secondary spreading are key problem areas on mountain pastures.

In the past many farmers irrigated pastures and mountain meadows in the Alpine regions. For this purpose they have created simple and small irrigation ditches to which the water was diverted from creeks. The water trickled over large areas of meadows and pastures, supplying soil with moisture and nutrients. Even today large differences in the biodiversity of pastures can be observed within former irrigation channels. Irrigation of mountain pastures is nowadays rarely practiced. Only remnants of this ancient culture technique are to be found as traces in the landscape.


The aim of the research project was to find out where this technique was practiced and its importance on biodiversity, agricultural yields and cultural landscape. Furthermore costs and benefits of other methods of improvement of pastures and recommendations for the mountain pasturing were derived.
The research was carried out with three agricultural colleges in Carinthia, Salzburg and Tyrol. The partner schools have a focus on alpine pasture farming.

Students gained insights into scientific ways of working, learned research methods and applied them in practice. They did field work, contributed to field trips and excursions, made interviews and they learned to record and analyze relevant data. Cooperation with experts and three schools promoted social skills and team collaboration. In addition some students collected first practical experience during summer trainings.