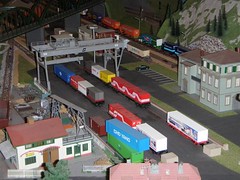 The aim of RoboConT Terminal project was the development of a computer-operated robot-robot-model describing an intermodal container terminal. The term "intermodal transport" stands for a transport process that includes at least two different transportation modes (rail, road, inland waterway). The current cooperation project especially dealed with the optimization of the rail-rail transhipment of loading units (containers, swap bodies, semi trailers). By combining the robot model with a simulation tool (developed by the BOKU university, see also www.simcont.net) it was possible to analyze, evaluate and illustrate different optimization approaches. The innovative component of this project was the transfer of computer based simulation results into a physical model. The intended result of the project was a fully operative model, consisting of software and hardware, which includes the following tasks and functionalities:

It was planned to finish the project within two years. At the end of the second year users should be able to compare directly their performance with the simulation results and at the same time the corresponding physical movements can be tracked in the terminal model.