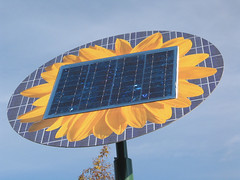 International studies such as the "Renewable Energy Sources and Climate Change Mitigation" of IPCC (2011) or the "World Energy Outlook" of IEA (2011) show that development paths to a global sustainable society are dependent on availability and a high quality of technologies for the use of renewable energy.

Against this background, the research project RIOSOLAR addressed the technologies for the direct use of solar energy - solar thermal and photovoltaic. Pupils worked out the research highlights of the Austrian solar energy research and analysed the impact on the historic market and technology development since the 1970s. Furthermore empirical case studies were identified, technical and economic indicators were analysed and scenarios for future development up to the year 2030 were presented.

The used methodology consisted of the analysis of technical and economic learning curves for technical system components and total systems. The Austrian, the German and the global markets were considered. The pupils of the HTL Wiener Neustadt analysed case studies in their education and living environment, thus creating valuable empirical data, which was then compared with the results of an international literature review and technical modeling. Based on these data, scenarios for the future development of technical, environmental and economic parameters were created up to the year 2030.