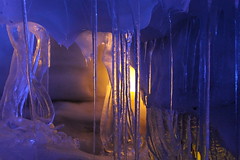 The scope of CAVE-LIFE was the investigation of ice caves as a glacial refugium for microbes. In order to sustain reproduction and metabolism the living communities in this harsh environment must adapt to extreme conditions such as low temperatures, low nutrient concentrations and very limited availability of liquid water. So far, knowledge about the microbial loop in ice ecosystems such as ice caves with its various compartments (ice, melt water, sediment and ambient air) was scarce. Moreover, most of these caves in Central Europe are subject to touristic usage which most likely provokes an impact on the original composition of the cave flora and fauna. To assess the ecological potential of those ice caves in term of biomass and metabolism (respiration, carbon production) we intended to conduct a serious of studies together with various schools from Austria and the US. Additional experiments were subject to study the consequences of anthropogenic impact.

Since ice caves are ultra-oligotrophic habitats there is a specific need for the application of non-invasive techniques to detect biosignatures. With a laser application which is able to detect photosynthetic active pigments, amino and nucleic acids in ice, respectively, we intented to establish a non-invasive mode to be able to detect these molecules via a rover even in niches of the ice caves with limited access. Furthermore, the scanning mode of the laser with various applications improved the resolution of data points substantially when compared to traditional coring and sampling. Together with schools of Innsbruck and the US we described biological communities with this modular laser system of which a portable prototype already exists. These investigations shaded light on so far neglected ecosystems which are extremely sensitive to slight temperature changes.