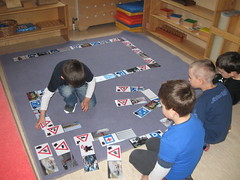 In KidsAct 11 year old pupils explored the interaction behaviour of car drivers and children in road traffic together with a team of social scientists and teachers. The question of interest was: Do young road users and their behaviour in road traffic influence the behaviour of adult road users? The pupils investigated the readiness of drivers to stop their vehicle when children intend to cross the road on unregulated pedestrian crossings (such as zebra crossings, yellow blinking traffic lights etc.) as well as their reaction to different behaviour. During the project the pupils got to know several research methods and instruments of the social sciences and learned how to use them. Moreover the young researchers learned to explore a certain topic comprehensively with scientific measures. Being road users and scientists at the same time, the pupils constantly reflected and evaluated their own behaviour during the whole research process.

KidsAct produced data and improved knowledge about the interaction behaviour between car drivers and children which so far had been a quite neglected topic in previous studies. The project identified communication and interaction difficulties and traffic conflicts between young and adult road users and developed strategies to solve these problems. The project aimed to adapt critical behaviour and to implement measures to improve the interaction between adult and young road users.