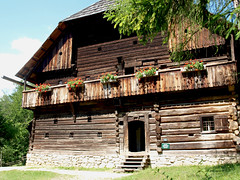 Wood was and still is an important natural and sustainable raw material. Archaeological findings show that the utilization of wood – as fuel wood and for tools – has been known since 400.000 years. In the past, different wood species were used according to their properties. 27 different wood species were used in a farming house at Bohemia in 1917. Almost all parts of a tree were used in former times – for example, also crooked or bended ones.

Goal of the project was to determine the historical wood utilization with the help of objects from the Austrian Open Air Museum Stuebing. Which wood species were used for which purposes? Which parts of the trees where used for which purposes? How much timber, fuel wood and further assortments can be utilized out of a tree? What was the demand on timber, fuel wood and further assortments at a farming house?

The pupils had the possibility to learn how wood scientists and ethnologists are working. They took part at scientific analyses as well as practical measurements - for example to determine the demand on timber to set up a farming house. Further the pupils learned about sustainable utilization of wood during theoretical lessons as well as “live” at the museum. They were involved in the determination of the demand on wood. For example they investigated how much fuel wood was used at grandfathers’ time and is used nowadays in their families.

Working with children and youngsters brought further experiences, which will be included in the future teaching plan (knowledge and skills) of the museum.