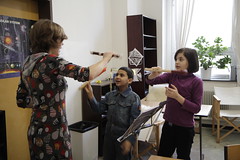 Multilingualism in music (bi- or multimusicality) and the Understanding of the "Other", the "Unknown"

The main research topics of this project were musical identity per se and multilingualism in music (bi- and/or multi-musicality) and understanding the ‘other’ and the unfamiliar in new music languages.

Getting to know new music languages was intended to help to eliminate mental barriers and to help pupils to treat their fellows respectfully. Pupils and teachers jointly developed sustainable concepts in order to understand, learn and identify interculturality. In order to achieve these goals via music, the integration of various music languages was planned. This also made it easier to get into contact with the children, because they could and would find individual connecting factors. In addition, pupils without migrant backgrounds had to learn other, unfamiliar music languages so that they no longer experience the ‘other’ as a foreign body, but as a part of society. An essential part of the project was that pupils bring their ‘own’ songs or their favourite songs to the class and speak about them. The idea was to create a song book from all of the results. This contained music from as many music languages as possible.

Giving pupils the role of researchers and musical educators not only promoted communication and fostered their interest in academic work and research findings, but also supplied the researchers with important information about their musical identity and that of their parents.This can provide answers to many questions related to existing problems of integration in schools and can significantly improve the pupils’ results.

The research project used a combination of quantitative and qualitative methods in ethnomusicology (explorative research, ero-epic dialogues and ongoing documentation), which were all underpinned by didactic approaches.