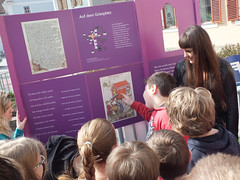 Working materials 2.0 for the Paths of Medieval Styrian Literature

How to convey medieval texts in a medially shaped area of tensions between spoken language, scripture and Memory

Since 2012 the „Steirischen Literaturpfade des Mittelalters“ („Styrian Paths of Medieval Literature“) constitute a unique network consisting of eight thematic paths which inform all interested people about the most significant works of literature exactly at those spots where this literature originates from or was handed over. From its beginning, this long term initiative was accompanied by the „Working Materials“-project, which aims at exploring all locally affiliated texts together with students and pupils, as well as making all findings available not only to the general public but also to the various fields of education. Based on the encouraging results of the first phase of the project, which deals with the content and language of the Styrian texts, a new topic builds the focus of the project: mediality combined with aspects of scriptural and oral memory are now intended to form the centre of cooperative studies as conducted by scientists, students, teachers and their pupils in order to answer questions related to the emergence and delivery of medieval texts. The expected benefit is the creation of comprehensive didactical tools for the teaching of old literature in schools.

By fostering a critical and playful reflection of scriptural mediality we moreover hope to strengthen the general awareness for today’s more and more important phenomena of transmediality and media convergence regarding the way we all make use of information and of offerings for distraction as derived from cultural or simply entertaining backgrounds. Therefore the project aimed at a (re-)creational debate and moreover encouraged pupils to tell their own stories ‘behind’ the texts. At the end of the first and second phase of the project a touring exhibition brought the most creative works of the pupils back to the Styrian places of medieval literature and to the university.

The cooperation was carried out through the partnership of eight regional schools all located close to the medieval paths, i.e. the Neuen Mittelschulen in Vorau, Wildon, Scheifling, St. Katharein an der Laming and Neuberg an der Mürz, the Abteigymnasium Seckau, the BaKip in Bruck an der Mur, and the Volksschule Unzmarkt-Frauenburg. Moreover, the association Steirische Literaturpfade des Mittelalters, the Universitätsbibliothek Graz, the Zentrum für Informationsmodellierung – Austrian Centre for Digital Humanities, the Fachdidaktikzentrum der Geisteswissenschaftlichen Fakultät, the KinderUni Graz, and the project MimaSch at the University of Bamberg function as project partners.

Information about activities and educational materials, which were compiled in cooperation with pupils and students, is available on the project’s Text Portal: http://gams.uni-graz.at/literaturpfade-arbeitskoffer.