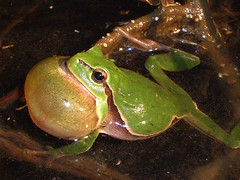 Amphibians and Reptiles in Human Areas of Settlement

Amphibians and reptiles are amongst the most endangered organisms. Apart from global factors, such as climate change and disease, the loss of habitat is the deciding factor at a local level. In our region it is particularly important that several species have similar spatial requirements to humans and prefer thermally favourable valley settings with open vegetation. Most of these spaces were already lost during the last century through building, drainage and intensive farming.

In human settlements with sufficient green space, important alternative ways of survival are developed through the creation of small freshwater areas (e.g. ponds) and dry areas (stone piles, dry meadows, hedges). In some areas these are, apart from locations determined by industrial plants such as quarries, the last refugial spaces. However, knowledge of the occurrence of amphibians and reptiles in human settlements is very limited. This is mainly due to the limited accessibility of gardens, which can only be mapped by involving the public. Moreover, data are lacking, documenting the effect off massive anthropological interventions in the natural succession, particularly in small freshwater bodies and their amphibian fauna. The knowledge of reptile populations in human settlements is even more limited.

In this research project, students undertook a stock-taking in the gardens of their own family environment under scientific guidance. From a scientific point of view this had the advantage of making accessible otherwise inaccessible areas, and that information on the ‘history’ and anthropogenic influenced such as design and management could be recorded. The cooperating schools were located in suburban zones, where there was a large proportion of green area, or in rural regions with a large catchment area. This was expected to significantly widen the knowledge base of the population (situation) of endangered amphibian and reptile species in anthropogenic settlement areas in Southern Styria. Students gained insight into scientific methods and learnt to apply modern scientific research methodology.