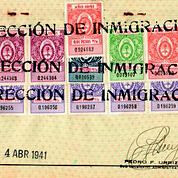 The forced displacement of the St. Pölten Jews to collections flats in Vienna, 1938-42

The eviction and forced displacement to so-called collection flats within their hometowns and in Vienna are barely being mentioned in the ego documents of the Jews and Jewesses dislodged from Lower Austria between 1939-1942. Neither the affected persons themselves nor the historians researching the Shoah attributed high importance to this initial displacement; it was too much overshadowed by the subsequent traumatic events. The present project looked therefore for the first time into the hitherto unevaluated archival material and life historical sources in order to examine the administrative and regulatory processes on the one hand and the impact on those affected on the other hand.

Two seventh grade classes of two high schools in St. Pölten (approximately 50 students) looked into the family history and social situation of Jews and Jewesses in their home town before 1938 and into their life realities in those collection flats. Based on their own reflection on the meaning of living and being at home, the adolescents discussed the information gained on forced displacement within the Jewish ego documents. Wolfgang Gasser documented their cognitive process.

In a second sub-project Philipp Mettauer researched the organisation and processing of forced displacements by National Socialist authorities. Furthermore, number, location, size and furnishings of those collection flats in Vienna as well as the life realities and the freedom of action of its inhabitants were looked into. For the reconstruction of living conditions and social networks from those displaced from St. Pölten, he used the students’ research results. Further, some pupils voluntarily organised a meeting of St. Pölten Jews’ descendants. Beyond that project, the “learning and memorial site – former synagogue St. Pölten” was extended.

In the project „Our expelled Neighbours: Jews in Central Lower Austria – Research and Commemorative Culture“ of the Institute for Jewish History in Austria citizens were invited to look in their archives for memories like objects, pictures, documents and letters. The aim of the project was to find out more about various aspects of Christian-Jewish coexistence before, during and after the war – friendship, school, professional and everyday life.