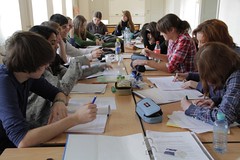 Melting Pot!? dealt with historical restructuring processes in suburban Vienna from a spatial-oriented perspective. In the course of the extension and restructuration of the city, the 16th district of Vienna, Ottakring, had often been addressed as the “other” of civilisation: Historically, it was associated with a high population density, poverty, and a desperate housing situation.

The construction of this social space was analysed from a microperspective: The shanty town settlement “Negerdörfl”, built in 1911, and the social association “Ottakringer Settlement” can be seen as two different interventions in the developing suburban district. The shanty town settlement reacted on a structural-spatial level to the tense housing situation in the first half of the 20th century, whereas the social association approach had disciplinary and regulatory effects on the district population.

With the project the importance of the dimension “space” in history teaching and didactics was emphasised. Spatial oriented research methods were collected, adapted, and developed together with students. The students were provided with information on the handling of source material and historical methods which allowed them to examine the history of the shanty town settlement and the social association in Ottakring. Based on this research an exhibition was developed, thus the results were presented to a general audience.