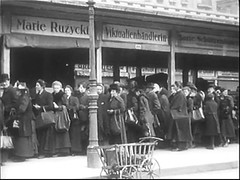 The aim of the project was a comparative analysis of Vienna and Budapest during the transformative years between 1916 and 1921. With emphasis on every-day life, on aspects of gender and youth culture, the research applied a spatial perspective on the period. Based on the “spatial turn” in the historical and social sciences, Metropolis in Transition therefore discussed specific, selected “spatial stories” of both cities.

The well-established periodisation in contemporary historiography was shifted to the time span of 1916-1921 in order to enable the investigation of changing urban functions of spaces during the Great War as well as during the aftermath of the war. It also allowed for foregrounding comparable forms of activity: the research covered altering techniques of representing power, the conversion of public entertainment facilities, the spatial reconfiguration of city districts by migration or the shift from the centre to the periphery due to the erosion of the middle class.

The exploration of specific urban spaces involved a number of successive steps and combines a great number of different types of sources and media. Following the guided research, the students, in co-operation with the researchers, worked out adequate display formats. On the one hand, students presented the outcome of their local research during city walking tours in Vienna and in Budapest; on the other hand, they documented their findings on the joint (online) project platform. The goal was to introduce students into theoretical and methodical working steps of scientific research, to jointly develop application-oriented forms of working with the documentary material and the critical use of web-based media tools.