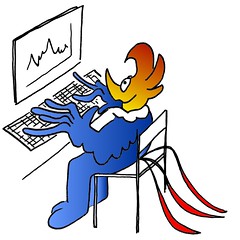 Woodanatomical analyses of conifers at the alpine timberline

Wood – an important natural product and an essential tissue for trees. Structure-function relationships of wood are not completely understood and thus major research goals. This project dealt with wood-anatomical and functional traits of trees at the alpine timberline.

This project focussd on (i) an inter-specific comparison of the wood anatomy of different timberline species (ii) an intra-specific comparison along elevational transects and (iii) on wood formation and hydraulic functions. The project was conducted by the Institut für Botanik of the Universität Innsbruck in cooperation with BORG Dornbirn, School of Education Innsbruck, Natura 2000 Gebiet Montafon and WSL Birmensdorf Schweiz.

In cooperation with school children from elective subject classes (grade 10-12, 10-15 pupils respectively) wood cores were taken along elevational transects at field days in Montafon, Vorarlberg and in Praxmar, Tirol. After preparation of microscopic samples, anatomical analyses were performed via image analyses software. In addition, studies on wood formation and tomography experiments were planned. Results were presented in international scientific journals as well as in public relation activities. Involved children presented the project at the “Woody Woodpecker-Fest”, and the Institut für Botanik and WSL was visited during excursions. The project was didactically advised and evaluated. In addition, a Woody-Woodpecker-module was developed, which offers an activity programme for other schools to be used at excursions (140 pupils, grade 7-12).

This project resulted in scientifically valid data sets on the one hand and offer school children to experience science on the other hand. Pupils not only improveed their knowledge about wood anatomy and tree physiology but also leart scientific strategies and research methods. Thus pupils, teachers and involved scientists profited from the project, which will form the basis for future cooperation.

The aim of the project "CITREE – City Trees Citizen Science” was the monitoring of urban trees considering their crucial functions for humans such as improving the microclimate and air. CITREE therefore developed a tool for citizens to monitor urban tree growth.