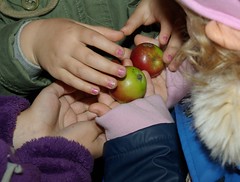 The project region of Western Styria is rich in traditionally managed mixed orchards. This cultural landscape type is equally important as a genetic resource, as a habitat of a rich flora and fauna, as a landscape structuring element, and it also presents a source of high quality food. The cultivation of fruit species like apples and pears is connected with a broad spectrum of practical and traditional knowledge, skills, customs, nutritional habits and different cultural expressions.

In order to stop the rapid decline of biodiversity in the traditional orchards, an interdisciplinary approach and a broad bundle of measures is necessary.

The aim of this project was a census of the genetic fruit resources and the associated traditional knowledge, as well as the initiation of interest for research on biodiversity and the initiation of measures for the maintenance of threatened fruit varieties. The educational research focus was put on the development and the evaluation of learning environments in the sense of an Inquiry Based Science Education. The aim was to involve students of different age groups and different school types into authentic inquiry processes in cooperation with scientists, in order to develop their interests in biological, ecological and socio-scientific issues as well as their interest in scientific approaches. In this project the data concerning the biodiversity of fruits (in the region mentioned) was collected, documented, and the fruit properties were tested.

Students played the central part in acquiring the existing traditional knowledge, in gathering and testing the fruit varieties and in presenting the results at the final public event. Especially students of vocational schools are furthermore involved in the analysation and preparation of the data for scientific publications.