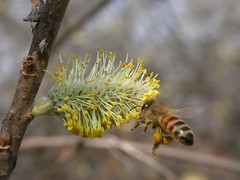 Phenology investigates the relationship between seasonal climate and seasonal cycle of plants and animals. Its importance as natural climate indicator has risen much due to the recent climate change discussion. Plants can be looked upon as sensitive instruments integrating the climate of the lower atmosphere. During the last decades a general shift towards earlier entry dates of the phenological spring and summer phases has been observed at mid and high latitudes of the northern hemisphere. The impacts of the observed rise in temperature and shift of phenological phases on ecology and agriculture are still difficult to assess. Phenology exemplifies the possible impact of systematically rising temperatures on nature well. It causes shifts of leaf unfolding, flowering and fruit ripening to earlier entry dates, which can easily be observed by the nature enthusiast.

While working for “NaturVerrückt” (“Verrückt” has a double meaning in German, it means crazy and shifted, which should indicate that the atmosphere might behave crazy in recent years and that phenological entry dates have been shifting as a consequence) pupils of five agricultural schools in Austria collected phenological data from hedges, which are composed of a number of different wild shrubs. They were specifically planted for this project on the agricultural trial sites at their schools. A special phenological app wias developed with the pupils, which offered the possibility to enter phenological observations, which were then directly transmitted to the phenological data base of the ZAMG. Thus data will also be generally available for education and research. At the school premises weather stations were installed and operated. The atmospheric data served as a basis to study the relationship between the seasonal climate development and the phenology of wild shrubs of the hedges and agricultural plants. The seasonal development of the plants at the schools and the current state of the work of the pupils could be tracked in near real time on the web by anyone interested.

The aim of the project “NaturKalender, the extended Austrian pheological Citizen Science Network” was to collect high quality phenological data from locations all over Austria with the help of citizens and present them as graphs in near real time.