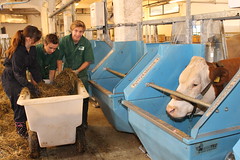 A sweet treat for cows

Investigation of a healthy and sustainable feeding strategy

In Austria, dairy production traditionally plays a major role. Feeding strategies are required to be healthy, balanced, but also ecologically and economically reasonable, which also implies to prefer locally produced feed. Using large amounts of grain in dairy diets supports high milk yields, but these large amounts of starchy feed may impair the physiological balance of the rumen ecosystem of cows, leading to a higher risk of rumen- and metabolic disorders. Feeding grain also renders social and economical consequences, by directly competing with human nutrition. Using byproducts of the sugar-producing industry, like molassed beet pulp, could be an alternative to feeding grain, but has not been extensively used in practice so far, especially not with rations rich in forage, like the ones commonly used in Austria. Beet pulp delivers energy by its content of fibres and sugar, whereas grain mainly contains starch. Therefore, beetpulp might be able to stabilise rumen physiology and reduce the risk of metabolic disorders often observed after feeding large amounts of grain.

The project „cowcandy“ has evaluated the effect of using molassed beetpulp in forage-rich rations on nutrition physiology. Our hypothesis is, that beet pulp can be used as an alternative for large amounts of grain without negative consequences for the ruminal digestion. Therefore beet pulp does not only have social and ecological advantages, but also supports animal health, resulting in economical advantages.

This project has used a 2-step approach to evaluate beet pulp as concentrate for dairy cows in vitro and in vivo. An intensive cooperation between the pupils of the schools HBLVA for chemical industry and BG/BRG Berndorf was realized during the whole project period. One aspect was to offer project presentations for a large number of pupils, explaining the scientific background, the aim of the study, as well as showing first results and giving a large number of pupils an impression of science.

The second aspect was the close cooperation of some pupils with the scientists within the framework of their summer internship at the institute or farm, performing the actual scientific trials. During the first summer of the project, the impact of different rations on digestive physiology was tested in vitro. The results of this work enabled scientists to design a ration that was evaluated in vivo during the second summer of the project, with the support of some pupils.