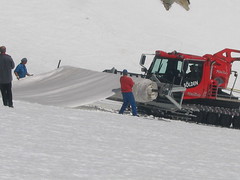 Tirol´s main industry is tourism. However, climate change is also affecting the alpine space which results in endangering the year round usage of ski pists of glacial areas. So far, all glacial skiing areas in Tirol are threatened by large losses of ice masses if they would not take action to reduce ablation which can be achieved by coverage of large areas with industrial fleece. The fleece is made of polypropylene and can help to preserve ca. 1,5m of snow during the coverage period from May to September. The economic gain is evident, however, there are serious ecological concerns regarding the usage of this fleece on snow.

Snow and ice are inhabited by living communities consisting of microbes and metazoa which show an active metabolism depending on the availability of liquid water. Consequently, with coverage during the main vegetation period a change in numerous living conditions is the case, i.e. the incoming radiation which is crucial for autotrophic organisms. Hence, with this change a shift of carbon budgets from large glaciated areas was observed. Moreover, all atmospheric depositions which serve as well as nutrient sources for the cryobiota were no more available due to the cut off.

The most critical issue was the addition of a lubricant which was water soluble. During melting phases and precipitation events this lubricant was dissolved from the fleece and afftected not only the living communities but also the water circuit.

It was the scope of this project to define and quantify the impact and implications of the fleece on the organisms in ice and snow. Moreover, we wanted to initiate a constructive discussion with stakeholders and producers of the fleece to possibly find alternatives to avoid the usage of lubricants. This interdisciplinary study enabled young students to achieve a sensitive perspective on our living space in the Alps and the touristic implications and effects on our environment.