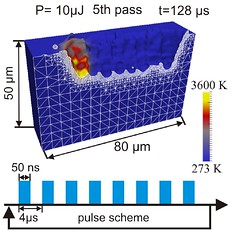 The development of femtosecond lasers has opened a new era in laser material processing. A great number of breakthroughs has been achieved in medical technology and surface treatment. Multiplex coupled phenomena occurring with ultra-short pulsed laser ablation severely impede process design. Consequently the objective was to develop a three dimensional multi-physics simulation model providing a sound prediction of process results of material treatment by femtosecond lasers.

Comprehensive understanding of the physics of beam-matter interaction and mathematical representation of these processes was a prerequisite. Creation of the simulation model was based on models for laser machining formerly developed at the institute. The basic software OpenFOAM has been modified and expanded for that purpose. Thus simulation of laser ablation with pulses down to 1ns has been made possible. Phase transitions, wetting, fluid dynamics, beam propagation etc. were already contained in the existing model. In order to represent the absorption of ultra-short laser pulses in metals it was necessary to implement the so-called two-temperature model. Additionally the gaseous phase was calculated by the Navier-Stokes equations for compressible media to encompass the shock waves of explosive evaporation.

The students of the participating schools were about to learn about the scientific approach in general and were challenged to develop a compression algorithm optimised for the special application accordingly, taking into consideration statistical adjacency relations in order to reduce the data volume. The routines to be developed were integrated in the simulation subsequently.